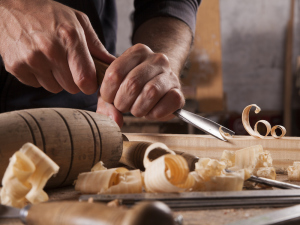 Herbert M. Golden, 90, passed away on September 8, 2019 after a long battle with dementia.

He was born February 11, 1929 to the late William L. “Pop” and Grace Golden in Danville, VA.  Herb was a contractor most of his life, and continued to build and tinker for years after retiring.  He said he always built homes, not houses.  Besides building many homes from the foundation up, for years he did small projects for people that needed his carpentry expertise, referring to his projects as “church work;” as he was meeting the needs of others.  Always remember, “measure twice, cut once.”  Prior to his career as a contractor, he was a four year veteran of the U.S. Air Force.  He was a great son, brother, husband, daddy, papaw, neighbor and friend.  He will be greatly missed, but the memories of his actions and advice will live on through his legacy.

A private graveside service will be held on Friday, September 13.  A reception and receiving of friends honoring his life will be held later that day from 4:00-5:30 p.m. in the Life Tribute Center at Cumby Family Funeral Service in High Point.  Memorials may be directed to Hospice of the Piedmont, 1801 Westchester Dr. High Point, NC, 27262.  Special thanks is extended to Zuset “Susie” for her extraordinary care of "Mr. Herb" over the last few months.  Matthew 25:21: “His master said to him, ‘Well done, good and faithful servant.  You have been faithful over a little; I will set you over much.  Enter into the joy of your Master.’”

To send flowers to the family or plant a tree in memory of Herbert Manley Golden, please visit our floral store.