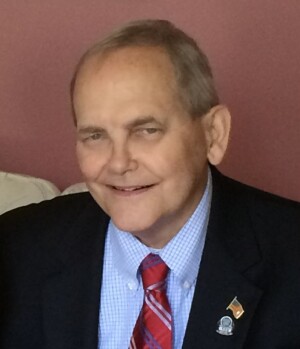 Mr. Robert “Bobby” Weaver Apple, 79, a resident of High Point, North Carolina, went to his eternal home on August 9, 2022.  He passed away peacefully at home.

Bobby was born March 11, 1943, in Greensboro, NC to the late Avery William Apple and Sarah Frances Weaver.  He graduated from Greensboro High School in 1961 and attended Guilford College.  He proudly served his country in the United States Navy.

Bobby started his career in heavy equipment sales at E.F. Craven Company and then moved on to Road Machinery Services before making a career change and joining the furniture industry.  He retired in 2007.

Bobby enjoyed reading, studying United States history, watching his beloved North Carolina Tar Heels play basketball, and spending time with his family.  He also enjoyed visiting the beach and mountains, especially Blowing Rock.  He was a member of First United Methodist Church in High Point for fifty years and the Wesley Sunday School Class.  He also was a member of the High Point Elks Lodge.  Bobby never met a stranger and everyone was drawn to his kind heart and gentle spirit.  He will be remembered as a devoted husband, wonderful dad, and loving Poppy.

A visitation for friends and family will be held from 5 - 7pm on August 14, 2022, at Cumby Family Funeral Service, 1015 Eastchester Drive in High Point.  The funeral service will be held at 1pm on Monday, August 15, 2022 in the Chapel of First United Methodist Church, 512 North Main Street, High Point, North Carolina.  Interment at Guilford Memorial Park Cemetery will follow the service.